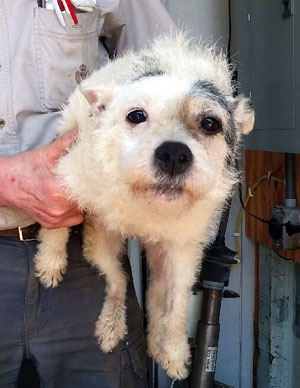 On July 8, 2018, a woman from Iowa named Ruby filled out the online volunteer application.  She had seen an ad on Craigslist for a female Jack Russell Terrier and suspected it was from a puppy mill.  She wanted to save the dog and foster it but needed the support of Russell Rescue in order to do it. The picture of the poor little dog was sad.  She contacted the person who had advertised the dog and picked it up. Ruby wanted to call her Gracie. Beneath the thick, filthy, urine-stained, rough coat and fat was a very pretty JRT.  Gracie was shaking uncontrollably and would not even move. After a visit to the groomer and the vet clinic, Gracie was ready to come home. For the first time in her life she was clean and safe and on a soft bed with access to grass.

Ruby’s two personal Jack Russell’s were not allowed contact with Gracie because we knew that she would probably be afraid of them.  With Ruby’s quiet and gentle instruction, Gracie learned to eat regular food and drink water from a bowl. She learned to use the bathroom on the grass.  Ruby had Gracie two weeks before she had an emergency that would prevent her from caring for Gracie any longer. I had to get Gracie out of Iowa and to Texas within a week.   And Ruby, trooper that she is, started looking at transport sites to help me get Gracie to Texas! She found a wonderful young woman named Courtney who was willing to drive 5 hours, but not further, because the price of gas made it too expensive.  So, we paid her to drive Gracie all the way to Sherman, Texas. Had we not found Courtney, I don’t know what we would have done!

In the 18 years I have volunteered with Russell Rescue, this is in the top 5 of the most difficult things I have faced.Sandra Jolley

From the very moment that Ruby told me another foster needed to be found for Gracie, I was a nervous wreck.  Hours and hours of phone calling, and texting, and emailing ensued. At night, my right hand, arm and shoulder were cramped and aching from texting so much.  Gracie had to have a health certificate and a new crate. She could not be allowed to get out of the crate on the way down to Sherman, Texas because we were scared to death that she might get loose.  Had Gracie been a normal dog….a happy well adjusted dog, it would have been easier. But, she was a timid, frightened little girl who was losing the only human that had ever shown her any kindness. It took 9 people 7 days to plan this transport.

Ruby rode in the car with a friend to meet Courtney that morning at 7:00 AM. She said her tearful goodbyes to Gracie and then turned her over to Courtney for the drive to Texas. Courtney drove 10.5 hours that day to Sherman, Texas.  She arrived at 5:30 on July 26th. Gracie is now at her new foster home with Lecia trying to adjust. In the 18 years I have volunteered with Russell Rescue, this is in the top 5 of the most difficult things I have faced. Gracie still needs to be spayed and have a dental and a bump removed from her rear.  But, for now……we are going to say a prayer of thanksgiving that we got her to Texas. 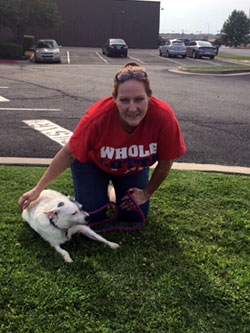 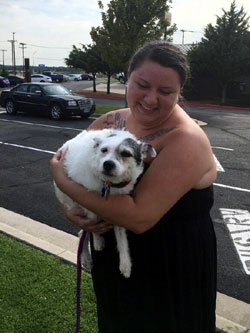 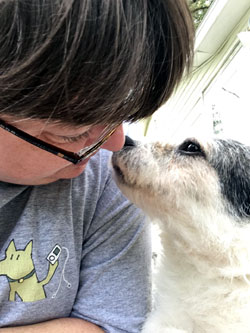 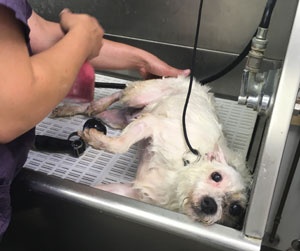 I wanted to say thank you to Terry for her patience in bathing the puppy mill dog Gracie I am fostering.

Gracie was so filthy and urine-stained from laying in her own messes and smelled like garbage. Terry was so gentle and took such good care in getting her all clean and smelling good, probably for the first time in her life.  Also, to the Anderson Veterinary Clinic and their patience examining her, giving her vaccinations, heartworm test, meds for her skin infection and mouth infection and other tests prior to her upcoming spay and teeth cleaning in a few weeks.  Dr. Howard and his wife are top notch; they took care of Gracie. They helped get her interested in food since she did not want to eat or drink water. Since she was a breeding dog, she ate puppy mash all the time, more protein for her and to have healthy puppies.

Gracie was very good for the veterinarian, and even though she was scared and shaking, she allowed them to do it all without a whine or whimper, and she didn’t lash out, either. Gracie is a Jack Russell Terrier. She is 5-7 years old, very quiet, timid, and paces when she is out of her kennel, which is her safe place right now.  She is not used to grass or being able to run around a yard after living in a pen all her life. She spooks at noises and is scared and cowers. In order for me to take her outside to potty, the kennel has to come out too and eventually she will creep out of it. I sit outside with her, and she will crawl within a couple feet of me now and that is progress; she will roll over, and I will scratch her belly.

She follows me a short distance around the yard but keeps an eye on her kennel and won’t get too far away from it. If you walk up to her, she will crouch to the ground but she does allow you to pet her. She has to decompress and learn no harm will come to her, and that bad life is far behind her now. She has had a rotten life with no love or kindness, used only to make money for a horrible breeder that has no regard for his dogs. Yes, people, this is the ugly side to Iowa where dogs are viewed as livestock by our government, and puppy mills allowed with little care to the dogs. Since she is done breeding, they no longer had use for her and gave her away.

I am so very glad for Russell Rescue who answered my messages and reached out to help her.  By God’s grace, which is where her name came from, Gracie now can learn what love, hugs and gentleness are. She has a second chance, and down the road, she can have a family to adopt her and give her a loving home for the rest of her days.